Vielen Dank, merci beaucoup, gracias: On Thanksgiving give thanks to bats 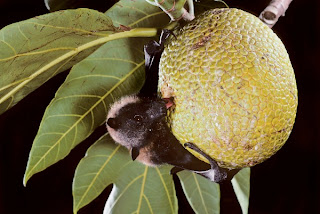 © Merlin D. Tuttle, Bat Conservation International, http://www.batcon.org/
This Thanksgiving holiday - a traditional American celebration - say thank you not only to our increasingly threatened bats in the US, but to all the bats around the world that help bring us fresh fruit and beautiful smelling flowers. Have we told you before that over 300 plant species rely on bats for pollination and seed dispersal? Although bats did not make your pumpkin pie today, they do help bring you bananas, peaches, mangoes, guavas, carob, avocados, cashews, dates, figs and other exotic fruit to chew on.

Why else should we thank bats? Bats' role in insect control not only helps farmers and protects crops; bats help keep disease at bay by decreasing mosquito populations. Viral diseases transmitted by mosquitoes, including West Nile virus, malaria and yellow fever, are severe and life-threatening. Malaria, for example, infects between 200-300 million people annually worldwide, with up to 1 million fatalities per year, most of these young children in sub-Saharan Africa.

And if that's not enough to be thankful for, bat research is proving fruitful in many fields. Scientists are studying bats to learn more about their language, echolocation skills, flight abilities and other unique characteristics. This research could one day yield new medicines, help design controls for unmanned aircraft and much more. To learn about new scientific discoveries related to bats, visit the Year of the Bat science page.

And thank you to all the bat lovers, conservations and researchers who put bats in the spotlight. Happy Thanksgiving... and don't forget to keep your eyes open at dawn and dusk for bats winging their way through our holiday sky.

As ABC TV in Australia reported earlier this year, "Now is not a good time to be a Flying Fox."
The grey-headed Flying-Fox, which is listed as vulnerable under Australia's Commonwealth Environment Protection and Biodiversity Conservation Act, may soon be facing eviction from Sydney's Royal Botanic Gardens.
A growing colony of flying foxes has made its home in Sydney's Royal Botanic Gardens for nearly a century. Although flying foxes have been present in the Gardens since the 1920s, the camp increased dramatically in size during the 1990s, echoing the "urbanization" of bats in Australia's metropolitan areas. The up to 22,000 flying foxes delight tourists who visit the Botanic Gardens, but are slowly damaging some the Garden's heritage trees. 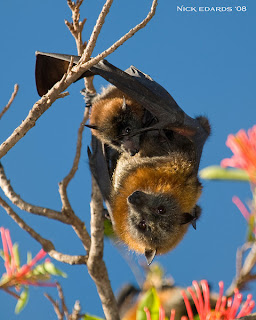 The Botanic Gardens Trust was granted permission by the Australian government to "relocate" the Flying Foxes this year using noise disturbance and other methods, similar to a flying fox relocation from Melbourne's Botanic Gardens in 2003. But due to issues raised regarding potential harassment and sleep deprivation, interference with flying fox breeding and roosting patterns, and lack of nearby appropriate resettlement locations, the Botanic Gardens has postponed the flying fox relocation until May-June 2011, while it conducts extensive research and monitoring.
A coalition of animal welfare groups, including the Humane Society International in Australia, animal rescue group WIRES and several bat conservation organizations, has raised concerns that the proposed relocation plan poses a number of risks to the flying fox colony.
The Humane Society also reports that the grey-headed flying-fox is in decline in Australia and internationally: "The decline is so extreme that the species could be extinct in around 80 years unless an effective recovery plan is implemented."
Today and tomorrow, the Australian court will hear arguments from both sides. Until a decision is handed down, Sydney's grey-headed Flying Fox will remain an unwanted tenant in its chosen habitat "down under."
Listen to the original ABC report here.
With the focus on flying foxes today, the Year of the Bat welcomes two new national partners, Australasian Bat Society and Bat Advocacy, Australia. Glad to have you on board, mates! (And special thanks to Nick Edards for his insight into the flying fox case.)
Posted by Year of the Bat at 1:25 PM No comments: